I was on the train from Pulborough to London, over an hour of a journey and listening to The Feud. My mind just drifted away with their music, I’ve been listening to them for ages now and I still get amazed by how they feel good to listen and what good memories and emotions they bring up. I don’t even have the new song on my mp3 player, just some old ones, also few previews to which I’d love to get full versions one day (Perfect Stranger for example). I remember a song that I don’t own and I loved it… well I did remember it, now it’s fading away, I can’t recall the text or the melody and can’t find it on any of their streams. All I know is that they used to play it back when they were new with In Between the Lines EP. How excited I was to get the shiny new red cd and their t-shirt which by now got pretty worn but I still treasure it.

It’s just so mind-eating how these guys are not famous and noone knows them! I don’t get it. Their music is incredibly juicy and great and on the Rock For People festival (the biggest Czech music festival) they are always absolute stars. What they do to the crowd is amazing. People who don’t know them get blown away by their energy, filled by it and moved by it. They jump like crazy and probably wish they knew the lyrics. It’s something that happened to me the first time I heard them on Rock For People years ago. Noone knew them and the space in front of the stage was almost empty. If my memory serves me right, my best friend Maude showed me their In Between the Lines video just shortly before RFP and told me they’ll be there so I came to their stage specifically to check them out live and I was excited. And found them incredibly good just from the first song! I fell in love with their sound, Jamie’s hot voice and the grumpy look in his eyes, with Stephen’s smile and Luke’s funny hair. And their skills. And couldn’t get how can there be so few people listening to them! But I was pleased of course because I had them all to myself (almost). It was almost as cozy as on their another gig in Chapeau Rouge where the room was much fuller but also much smaller. It always feels good to be closer.

Their music still fills me with energy anytime I hear it and so far they haven’t done anything that I didn’t love, maybe except for Mad and Rise, those are usually not my favorites, though I can get mad with them as well. It’s a perfect combination of the energizing songs and the calming ones that break your heart at the same time, like Slave or Searching. How fucking brilliant those songs are! And even their covers. Bloody hell, when they first covered and it was my favorite „Placebo“ song Running up that hill (I know it’s not theirs but I always loved their version), I couldn’t believe how good it was. It was perfectly comparable to the Placebo version and to the Kate Bush version, each one of them has something awesome and magical about it and they beat and complement each other at the same time. And you can take it from me, when someone covers a song that I love, it’s usually a fiasko but these guys nailed it and made me love them even more for that. Can’t get enough of them…

Anytime I hear Drugged up love, I’m back at RFP 2012. It was a wonderful year and I enjoyed it so much, I can’t begin to describe it. The storm was awful, I kinda lost my phone to the water and I was so scared in my little fragile tent, on my own, that I simply cried a little, I will confess it. But it got better after I found my friends. And it got all washed away by The Feud experience as they were insane again and of course, this time the space in front of their stage was filled. But hell, I managed to be in the front as I’ll always be because they are one of the two bands in the world that I simply need to see to have it complete.

I feel so close to them and I don’t know why. I only met them few times, yes, and talked to them, mostly Stephen. They’re simply lovable people, especially Stephen is always a smiling sunshine, hugs people just like that (and wears a really nice cologne) and even though I feel extremely uncomfortable approaching a musician I totally love, he somehow makes it easier and the barrier kinda falls down. I don’t think I ever met a band this friendly and not distant. Thanks to my english skills, too, I totally feel like I could simply hang out with them in a pub or on an afterparty (if there was any chance to get to one with them). I would just have to get over the fact how much I adore their music because it makes me speechless. I know they are normal and cool people and still, when I see them after a gig, I want to hug them and cry. Can’t explain how they make me feel. But it’s so different to the feeling the big bands give you, like MUSE for example. I simply cannot imagine spending some time with them because they are a massive band. Too bloody big for hanging out with them.

On that RFP, I think it was the last day and I was sooo tired. The sun, the gigs, long nights, little sleep, lots of jumping around and you get knackered after three days. But there I was jumping like crazy on Drugged Up Love which then became my RFP song and always brings me back. ‚Cause it’s true. I don’t wanna be in this reality, I don’t wanna be alone. Now I’ve reached the point of this extasy and I’ll never wanna let it go. And now I’m getting closer to you. When I listen to it, I feel like:“Hang on a minute, why the hell am I here doing this shit? I don’t want to be here and live my life like this, I want to go back to RFP and dance like crazy on The Feud because that’s when I feel like I am where I am supposed to be. And it’s just me and the music, I don’t care who watches me going mad. And I want to spend time with them.“

After the gig they did a DJ set on a different stage and I had the idiotic idea to have two beers. After all that sun! Dehydrated, tired, sweaty and I just had to go wasted as well, typical. I spoke to Jamie then and I don’t remember much about what 😀 All I know is that I felt really awkward and I couldn’t make a sentence or explain myself and he gave me his typical grumpy look and I was doing one inner facepalm after another. Stupid, stupid, stupid, I kept on shouting at myself in my mind when I left the stage totally embarassed. You get a chance to talk to them, there was noone else around and you blow it like this.

Ever since then I kept on having these silly fan daydreams about hanging out with them and truly becoming their best fan but they kinda dissapeared for a while and then I went to live in England for a year (which is now going to be a year and half) and I dreamt of maybe going to London to see them next time they have a gig there – because Manchester is riddiculously far away. But so is London and now they do gigs in Czech Republic instead! I’m seriously going through tough withdrawal syndrome and I need my fix and they won’t bloody come to Brighton which is at least a bit closer! Can you understand it? They go to freaking Czech Republic over the sea but can’t come to Brighton – the home of music – in their own country, how dare they 😀

Also it’s been ages since everyone is waiting for their new CD. I have no idea what’s going on, they’ve been promising it for over a year and last month they only released a new single. I’m hungry for more, I want a CD, I want to find out what was the song that never made it to the EP, I want to go to their gig (last time I saw them, I believe Stephen had dark hair, and a lot more of that hair, lol…) and go mad again. I want to shake my head from side to side and jump up in the mud if I have to, I want to go sweaty with them again (err… comes out a bit wrong but what the heck, they are incredibly hot, too ;)) and I want to get a new t-shirt if possible. And I somehow want them to go really famous because I believe they should and can be big! But there’s also the hipstery part of me who still wants them to be the quite unknown little band with the empty auditorium. And I want to keep in touch with them but at the same point I feel like I have nothing to say to them. There were times when I’d be perfectly able to talk to them about lots of stuff that was going on with them. I once spoke to Stephen about doing a naked show where everybody goes so energized that they drop their clothes. Dirty mind that beautiful guy, mwahaha. But now I’ve lost the plot and I’m just stuck with:“Err… I totally love your music!“. He even recognized me back then, said he saw me on facebook (obviously, I was kinda stalking them :D). But now? 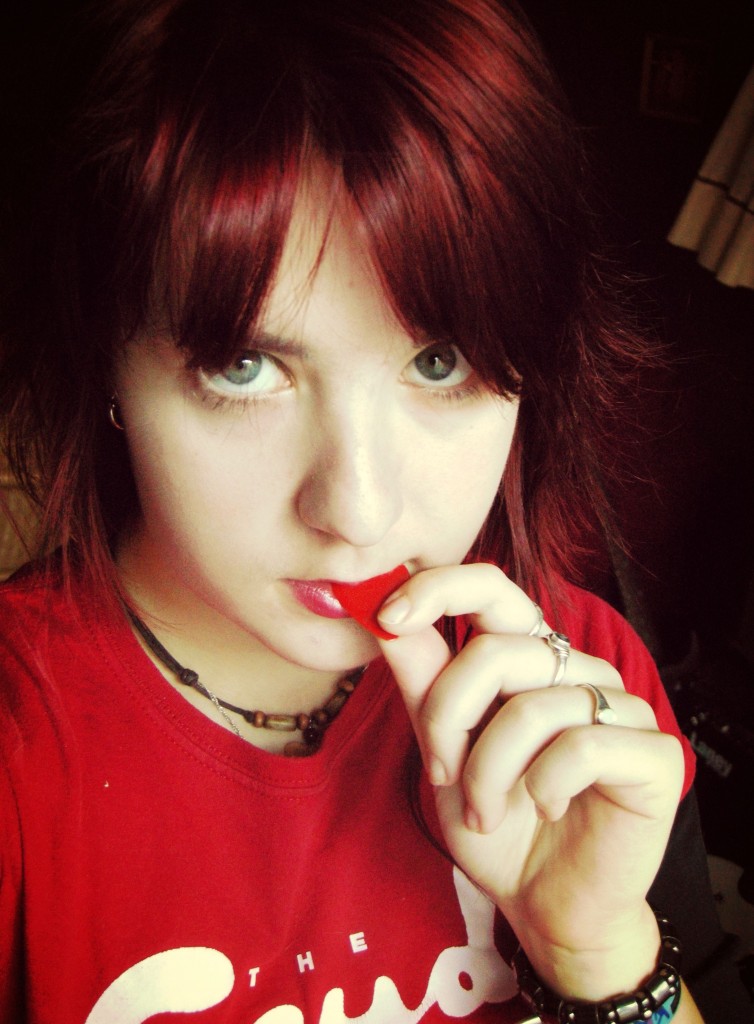 I suppose I’m just another crazy anonymous fan. The one that doesn’t even get the chance to go to their gig and show them some madness. The one that only listens to them all the time, drowning in the good memories and wishing to see them again soon, who taps the floor with her foot and shakes her head while looking out of the train window absently, with the earphones in and the bass tuned to max.

‚Cause this is love… 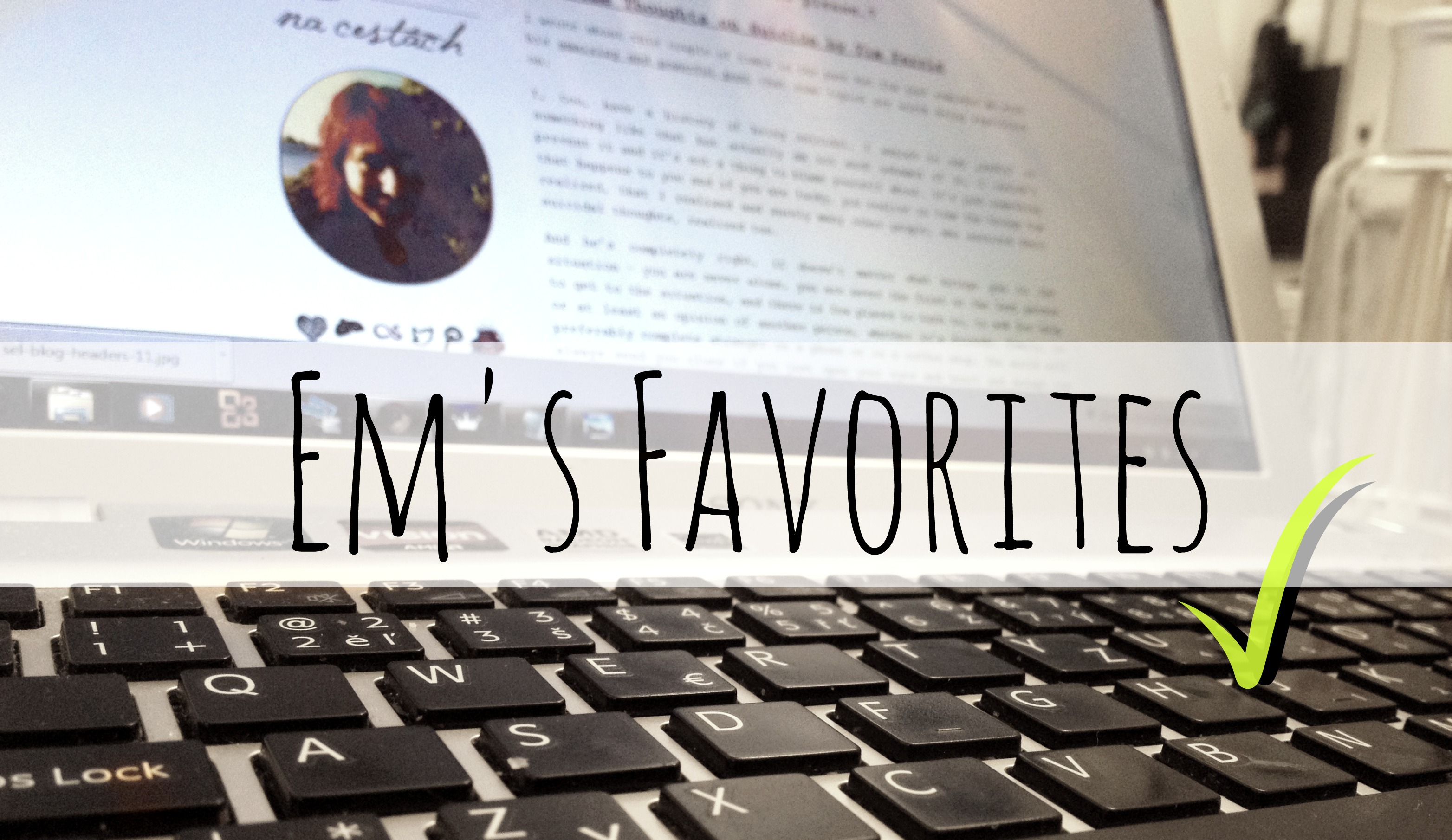 Em's Favorites: The Best Blog Posts You Need To Read